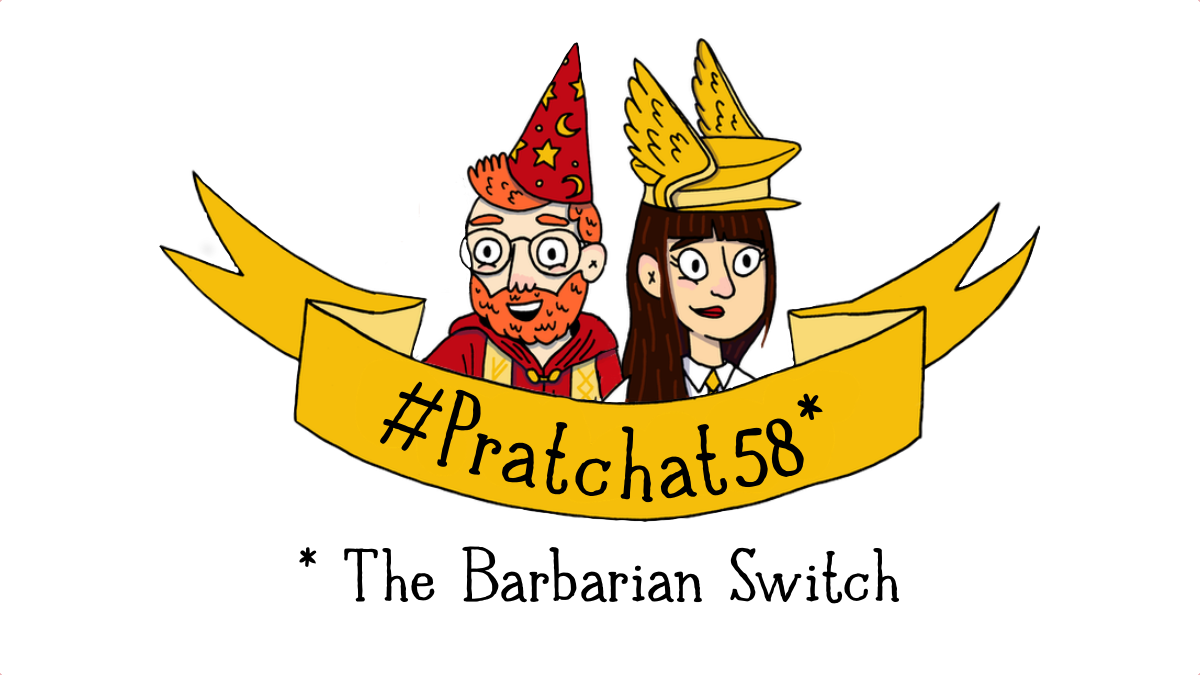 We explore every author’s worst nightmare as writer Penny Love returns to Pratchat and finds the barrier between reality and fiction getting all wibbly-wobbly in Terry Pratchett’s 1988 short story, “Final Reward“.

After a particularly bad row with his girlfriend Nicky – and a pint of wine – author Kevin Dogger decides to kill off the protagonist of his best-selling fantasy series. The next morning, Erdan the Barbarian appears on Dogger’s doorstep with the milk. He was, after all, promised a final reward: an eternity of carousing in the halls of his creator…

Content note: the story “Final Reward” contains discussion of (fictional) suicide.
If you or anyone you know needs help, use the Wikipedia list of crisis lines to find one local to you.

Written for the short-lived roleplaying magazine G.M., “Final Reward” is Pratchett’s go at the age-old tradition of writers writing about writers. But in true Pratchett form, it’s not just about that… Hailing from around the time of Wyrd Sisters and Pyramids, but “tinkered with” before appearing in A Blink of the Screen, it depicts an author ill at ease with the real world and human relationships – by all accounts not much like Pratchett himself at all. And then there’s the way it ends…

What did you think of this one? Have you ever written a character you’d like to meet in person? Would you swap places with them? And is this a dig at any real fantasy authors, and we’ve missed the joke? Join in the conversation using the hashtag #Pratchat58 on social media.

Guest Penelope Love is a writer best known for her roleplaying game work, especially with Chaosium for Call of Cthulhu, including the upcoming Victorian London campaign she mentions this episode. She previously joined us for #Pratchat45, “Hogswatch in Grune“, discussing the quite Lovecraftian “Twenty Pence with Envelope and Seasonal Greeting”. Penny is also part of Campaign Coins, who as well as making gorgeous metal coins for use with tabletop games, publish Penny’s comic fantasy short story collections about “The Three Dungeoneers”, which you can find here. Penny is on Twitter as @PennyLoveWrites, or you can follow @CampaignCoins for more on their projects.

As previously advised, due to some technical difficulties – and not a time machine, to Ben’s disappointment – the next episode to be released will be #Pratchat57, discussing the third Long Earth novel, The Long Mars, with Joel Martin. Look for it in the Pratchat podcast feed on August 25.

Next month in #Pratchat59, we’re discussing The Science of Discworld III: Darwin’s Watch with science and fiction writer, Dr Kat Day! And after that, in October, it’s finally time for another general questions episode, #Pratchat60. This is the perfect opportunity to ask us about books you missed first time round, or general questions about Discworld, Pratchett, us and the show! Send in your questions for either of those episodes via social media (using the appropriate hashtag), or send us an email at chat@pratchatpodcast.com.