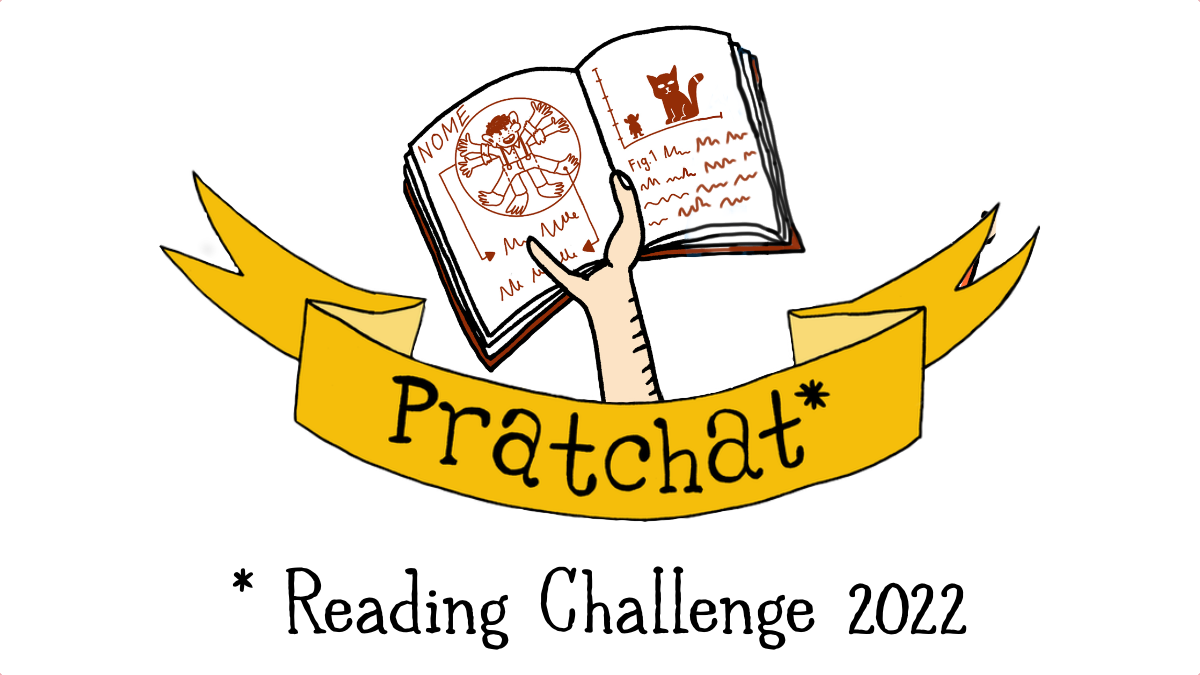 Want to read along with the podcast, but also read more books in 2022? The Pratchat Reading Challenge is here to help! You’ll find details below, and we’ve also set up the challenge on the StoryGraph, a web-based app that helps you track the books you want to read.

Below you’ll find six prompts to help you find new books to read across the course of the year. If you’ve not done this kind of challenge before, each is a constraint for picking a book, with the idea being you read six different books by different authors. But we’re not the boss of you! We’ve kept the number of prompts low to make it easy; if you’re already doing another reading challenge, feel free to use books for this challenge and that one. And don’t feel you have to finish the challenge, or even any specific book – this is meant to be fun!

If you want to discuss the challenge on social media, use the hashtag #PratchatChallenge2022 so we can find your comments. We’d love to hear what books you’re reading! You’ll find our picks, when we have one, below.

A book by another author mentioned on the podcast

There have been loads, but those who’ve cropped up more than once include Diana Wynn Jones, Douglas Adams, Naomi Novik, Ben Aaronovitch and Ursula K Le Guin. This can also include books written by podcast guests, which might include works by Will Kostakis, Stephanie Convery, Garth Nix or Claire G Coleman!

A book by another author who writes without chapters

You might need to do a bit of a search for these, but there are many classic and contemporary authors who don’t use chapters!

A comic novel by another author

Books with humour in them are a dime a dozen, but books that bill themselves as funny have become thin on the ground. Take a punt on someone else! A few names to get you started: Sue Townsend, Jasper Fforde, Stella Gibbons, or any of a host of comedians who’ve turned to writing.

A book by another author that plays with fantasy tropes

Some kind of fantasy novel that twists the standard tropes of fantasy – perhaps the dragon is the hero, or the magic ring is useless, or the chosen one is a fraud. Anything that subverts a common trope of fantasy counts!

A book by another author set in a fictional city

Ankh-Morpork is so alive we all feel like we’ve been there, but there are plenty of other cities that exist only in novels! The intent is for this to be an entirely fictional city, rather than a fictional version of a city from the real world.

A book by another author with witches as protagonists

Witches are traditional wicked, but they don’t have to be – and even the folktale kind can star in their own stories. Read one for this prompt!