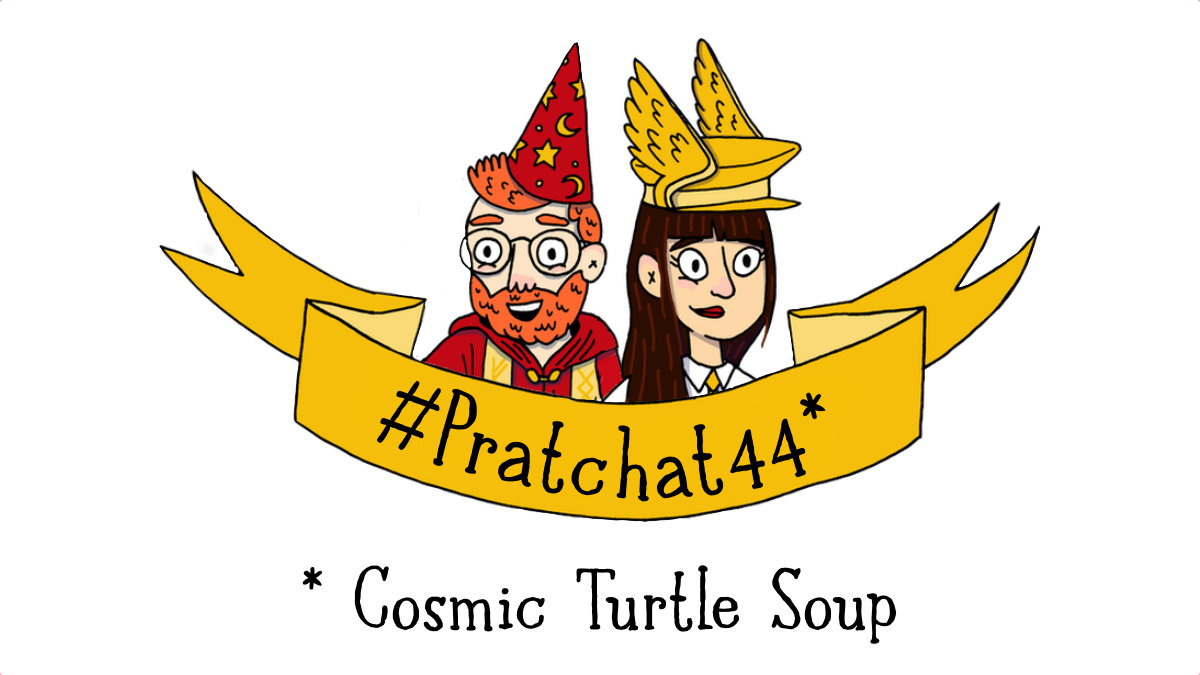 We’ve waited two and a half years for its 35th anniversary, but finally Joel Martin rejoins Liz and Ben to resolve the Discworld’s first (and most literal) cliffhanger in The Light Fantastic, the second Discworld novel, first published on the 2nd of June, 1986.

When we last saw them, failed wizard Rincewind, Twoflower the tourist and Twoflower’s magical Luggage – a living chest on legs – had fallen over the Rim of the Discworld. But instead of tumbling forever through space, they mysteriously find themselves in the Forest of Skund, surrounded by talking trees, gnomes and gingerbread cottages. The senior wizards of Unseen University – including Chancellor Galder Weatherwax, and the second of his Order, Ymper Trymon – soon discover what’s happened: the Octavo, the Creator’s book of spells, wants to keep Rincewind alive. One of its spells is inside his head, and all eight need to be read to avert an impending apocalypse heralded by an ominous red star…

While the usual story is that Pratchett only returned to the Discworld because The Colour of Magic proved popular, he did set himself up for a sequel by dropping his protagonists off the edge of the disc. Unlike its predecessor, The Light Fantastic has a pretty straightforward plot about averting the end of the world – but that doesn’t stop Pratchett from parodying everything from fairytales to druidic sacrifices and the conventions of fantasy writing. Plus this book introduces some concepts, and especially characters, who will come back later, including a certain no-longer-human Librarian, Death’s adopted daughter Ysabell, and octogenarian barbarian Genghiz Cohen. (The rest of the supporting cast are less fortunate…)

Does this feel like a “real” Discworld book yet? How do we reconcile these versions of Death and Ysabell with the ones we come to love later? Is it really a bad idea to start with the early books – or is it fun to begin with the early versions of ideas Pratchett would later develop more fully? And what on the Disc happens to Rincewind between this book and Sourcery? Use the hashtag #Pratchat44 on social media to join the conversation!

Guest Joel Martin is a podcaster and writer who has joined us twice before: way back in #Pratchat14 to discuss The Colour of Magic, and then again in #Pratchat31 for The Long Earth. While his podcasts are currently on hiatus, there’s soon to be exciting news regarding his speculative fiction writers festival, Speculate! You can watch for Speculate news on Twitter at @SpecFicVic, and join the festival’s mailing list via specfic.com.au. Find Joel online at thepenofjoel.com or on Twitter at @thepenofjoel.

Next episode we go back to another second book of a series, as we take a little break from the Discworld. Yes, it’s book two of Pratchett’s five novel collaboration with Stephen Baxter, The Long War! Send us your questions using the hashtag #Pratchat45, or get them in via email: chat@pratchatpodcast.com