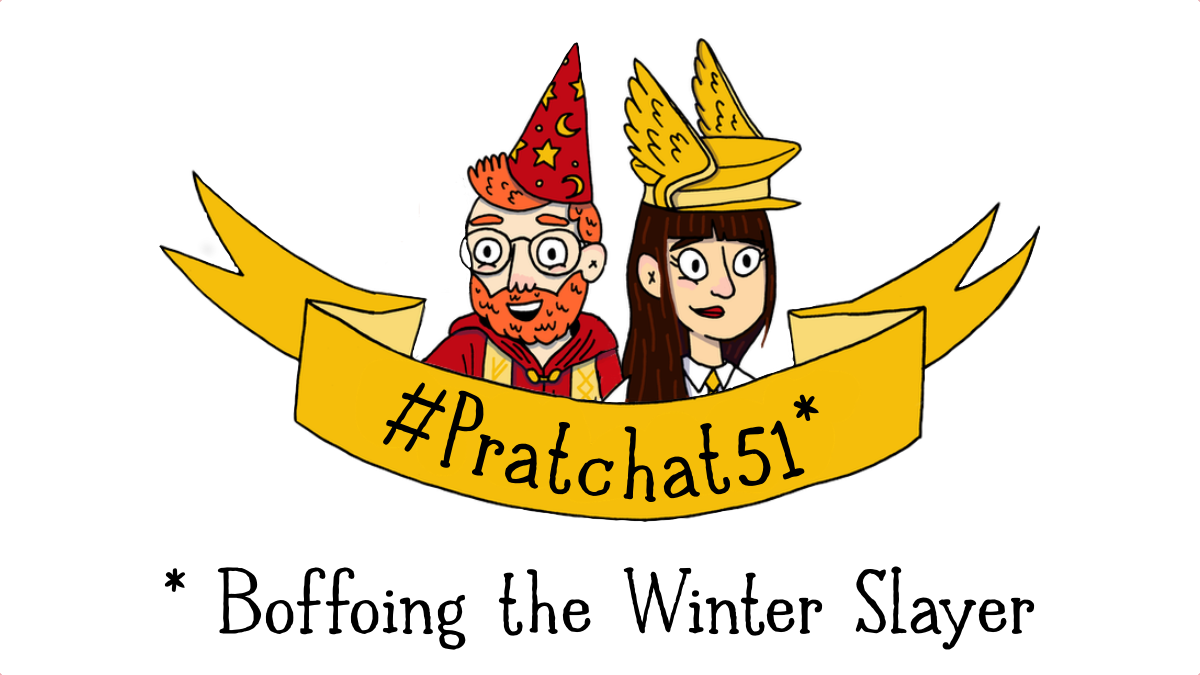 Welcome to the Year of the Lachrymating Leveret! Bestselling sci-fi and fantasy author Garth Nix joins Liz and Ben up in the Ramtops, where Tiffany Aching dances a forbidden dance and gets into more trouble in the thirty-fifth Discworld novel, 2006’s Wintersmith.

Two years after her first Witch Trial, Tiffany Aching is nearly a teenager and two months into her stint with her latest mentor – terrifying Miss Treason, the 113-year-old deaf and blind justice witch. In the dead of night Miss Treason takes her to witness the “dark dance”, but against the rules she is given, Tiffany does more than observe – after all, what good is a dance you can only watch? But Tiffany’s been noticed: the spirit of Winter himself has his eye on her now. There’s something different about Tiffany, too…but that might have to wait. The Nac Mac Feegle are back, there’s a witch’s cottage up for grabs, the boy she’s been writing went to a party with someone else, and if she can’t figure out how to fend off the Wintersmith, it might be an uncomfortably long Winter…

Published in one of Pratchett’s rare one-book years, Wintersmith advances Tiffany Aching into adolescence – and appropriately enough deals with themes of unwanted attention, uncontrollable urges, the perils of teenage and adult politics, and hordes of tiny blue men. Plus it’s full of favourite characters, both old and new.

Do you think Tiffany could have chosen not to enter the dance? Have the Feegles been to our world – and do they belong in this book, or has Tiffany outgrown them? What’s the most ridiculous thing someone has done to try and impress you? Join the conversation using the hashtag #Pratchat51 on social media.

Guest Garth Nix is a bestselling and award-winning Australian author, best known for his young adult fantasy series “The Old Kingdom”, which began with Sabriel in 1995. In November 2021 he published the prequel Terciel and Elinor, about the parents of the original novel’s protagonist. He’s also written dozens of other novels and short stories, including the Seventh Tower and Keys to the Kingdom series of novels, 2015’s Newt’s Emerald, 2017’s Frogkisser, and 2020’s The Left-Handed Booksellers of London, which recently won the Ditmar Award for best novel. You can find Garth on Twitter as @garthnix, and info about his books on his website at garthnix.com

Next month we’re not reading a book or a short story; instead we’re getting in front of the television and checking out the somewhat divisive BBC America series The Watch, “based on characters created by Terry Pratchett”. Is it a bold new punk direction for the Disc, or a travesty born from years in development hell and too much distance from the source material? We’re going to find out! Send us your questions via the hashtag #Pratchat52, or via email to chat@pratchatpodcast.com.