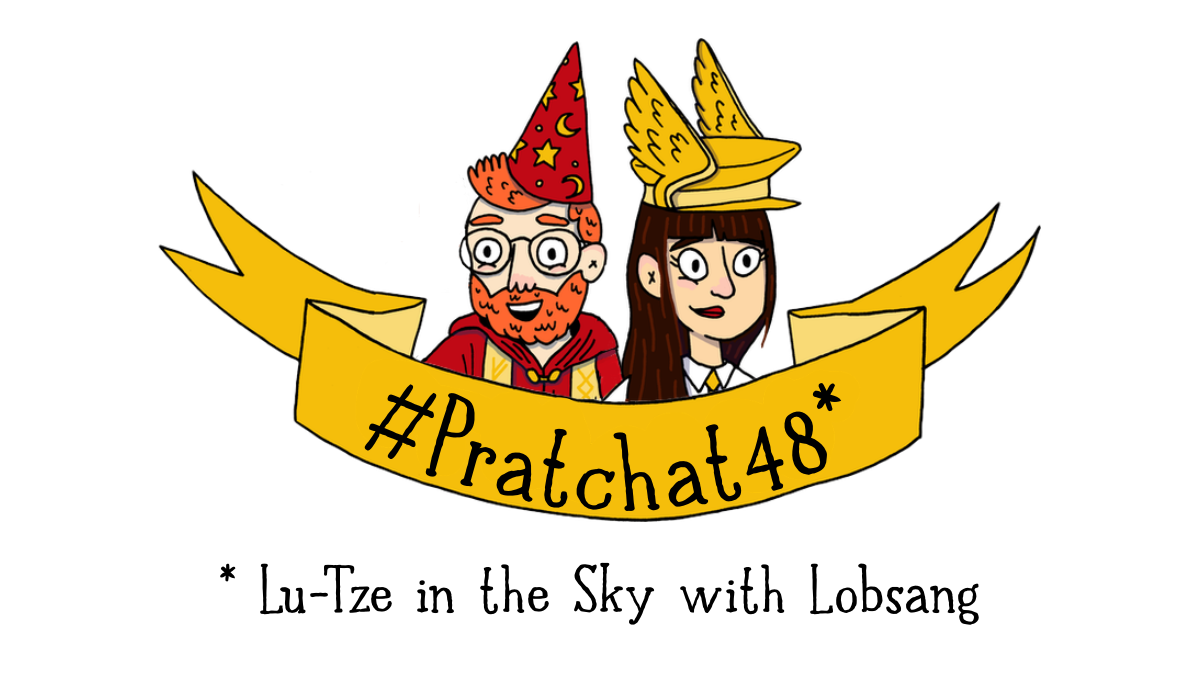 Freelance writer and journalist Ben Riley joins Liz and Ben for a magical history tour as Susan Sto Helit teams up with a couple of monks to stop time…er…stopping in the twenty-sixth Discworld novel: 2001’s Thief of Time.

In Ankh-Morpork, a mystery woman tasks the odd but talented Jeremy Clockson to build a clock so accurate it can measure the tick of the Universe. In mountain monastery of Oi Dong, Lu-Tze, sweeper of the History Monks, gains a new apprentice: the unmotivated but gifted Newgate “Lobsang” Ludd. And in his domain, Death senses that the Auditors of Reality, grey entities who count every atom, are once again seeking to curb the chaos of life. He recruits his granddaughter Susan to help find the son of Time. If they can’t, he’ll have to get the old band back together and ride out for the end of the world – at precisely one o’clock, this Wednesday…

Pratchett brings back a string of old favourites for this action-packed romp through…well, not quite through time, but it’s certainly “about” time. It’s the last book to properly star Susan Sto Helit, and for that matter Death; it brings back Lu-Tze, the sweeper who nudged Brutha in the right direction back in Small Gods; and Nanny Ogg is here too, in her first major appearance since the last Witches book, Carpe Jugulum. Oh, and there’s a main character named Lobsang, and we know all about that name…

Is this what you were hoping for in a third outing for Susan? How do you feel about the fate(s) of Lobsang and Jeremy? Where do you land on having an in-universe excuse for continuity errors in Discworld? And are the monkish wisdom jokes okay because they’re based more on kung fu movie tropes than actual Tibetan culture, or is it still a bit on the nose? Join the conversation using the hashtag #Pratchat48 on social media!

Guest Benjamin Riley (not to be confused with Spider-Man clone Ben Reilly) is an award-winning freelance writer and journalist. He’s written for Junkee, SBS Online, PopMatters, Overland, the Star Observer and many other publications. Ben also works in AIDS research and in HIV and sexual health policy, organises queer community events, and co-hosted and produced the queer political podcast Queers with Simon Copland from 2015 to 2019. (You can still find old episodes in most podcast directories and via the Queers acast page.) For more on what Ben’s up to, follow him at @bencriley on Twitter or hit up his website at benjaminriley.com.au.

In other Ben news, the videogame Table of Tales: The Crooked Crown, written by a certain Ben McKenzie, is now available on Steam!

Next episode we take another little breather – it’s been a long lockdown here in Melbourne, folks – to read a Pratchett short story: his take on Arthurian myth, Once and Future! It was originally published in 1995 in the collection Camelot, but like most of his short fiction you can find it in A Blink of the Screen. Send us your questions using the hashtag #Pratchat49, or via email to chat@pratchatpodcast.com.

And yes, we are planning something a little different and special for our fiftieth episode in December – watch our website and social media for news on that soon!